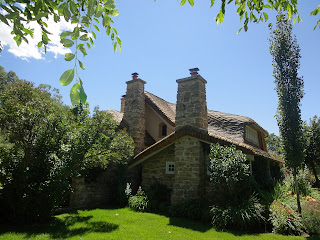 The House that Jack Built
Sometimes referred to as the Mushroom House, this picturesque home in Midway, Utah has a story worthy of another name: The House that Jack Built. Dee Halverson recounts the history behind it's unique curved shingles, hidden turret and carriage house, and why a United States president was a frequent guest, in a new book to be released in January, 2012.
Midway: Portrait of a People is a sequel to Midway: Portrait of a Town, and includes stories and photographs of each of the canyons surrounding the beautiful valley made famous by the 2002 Winter Olympics. Find out how a natural hot pot, owned by Swiss immigrants, became part of the world-class Zermatt Resort and Spa. Unique photographs show views of the valley seen only by horseback and described by local old-timers who know the trails and tales by heart. A must-read for hikers, bikers, photographers and history buffs who love the Wasatch mountains.
For more details on Midway: Portrait of a People, contact:
wdh@heritageassociates.com
Posted by Travelin'Oma at 9:42 PM